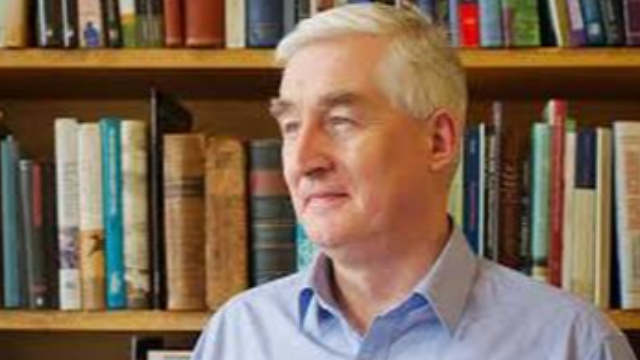 Interview with professor Charles Withers (University of Edinburgh) written by Róbert Győri associate professor and Chair of the Department of Social and Economic Geography at Eötvös Loránd University. Professor Withers will be one of our new honorary doctors in 2019, the Senate of the University hands out “Doctor et Professor Honoris Causa” awards at the General Assembly (Pázmány Day) in May.

Why did you choose geography at university and what attracted you to historical geography?
By the time I had to think about universities, I was pretty sure in my own mind that it was going to be geography (English was also a possibility). I had always done well in geography at school, partly from having very good teachers, partly from a childhood in which I was encouraged to read and to take an interest in the world. I chose the University of St Andrews because I wanted to stay in Scotland, to be fairly near home in Edinburgh (but not too near!), and because it had a good reputation as a university. Initially - this did not last - I had interests in physical geography: I did geology, geography, and botany in my first year at St. Andrews. The Scottish undergraduate degree is four years - a really good broad and deep intellectual experience. But by the end of my second year, I’d come to realize that people (or, really, the products of people’s work - books, pictures, landscapes) were more interesting than rocks and plants and so I turned to human geography. I never took a formal class in historical geography when I was an undergraduate: the one class on offer was on agrarian historical geography and really did not appeal (I spent my time reading Marx, Frantz Fanon, social anthropologists, work in cultural geography). What turned me to historical geography was my undergraduate dissertation. I did this on the geographical decline of Scottish Gaelic and, during the work, uncovered two previously unknown sources. This allowed me to plot the decline of Gaelic, parish by parish, back to the 1690s, when, before, we had only been able to map it by parish for the late nineteenth century (the 1881 Census). I still remember the thrill of finding this archival material.

That was the moment when I thought there might be mileage in working historically and thinking geographically.

During your career, it has always been important for you to research Scottish topics. You have been interested in the historical geography of Gaelic and also in the connections between national identity and geography. What does it mean to you to be a Scottish geographer?
That’s true, I have turned to Scottish things (less so recently) and, initially, that was partly a reflection of my PhD and, more latterly of course, of where I have spent the last 25 years of my scholarly life. But these interests and this work has never been - I hope it has never been anyway - a kind of inward-looking ‘Scotland-only’ focus. I have always tried to place Scotland in wider context, to use Scotland to speak to bigger questions. I remember struggling with the title to my 2001 book on just these grounds - what became Geography, Science and National Identity: Scotland since 1520. It was the bigger issues that had to come first. Their empirical exploration was through a historical geography of geography as a form of national knowledge: in maps, texts, fieldwork, and so on. And this was all influenced by my trying to bring together historical geography with the history of science.

Would you describe the research themes you have worked on?
That’s hard because in one way I have never thought about them as themes or as having a discrete identity: I have kind of been lead towards them for different reasons at different times. But I suppose, looking back, that you can see more or less distinct phases, or topics of enquiry. Following my PhD, I continued my interest in the historical geography of language, in language decline understood as an historical geographical problem. My PhD, which I completed in 1981, was the basis to my first book, in 1984. I then placed the historical geography of language in a more theoretical context, drawing on Gramscian hegemony in my 1988 book Gaelic Scotland: Transformation of a Culture Region. In a way, I ended this Gaelic language interest with a third book on the topic, one which examined Gaelic migrants in urban culture.

But it’s an interest I still have: I have always had in mind a study of Gaelic speakers across the world.

Geography has a very old scholarly tradition; we geographers are usually proud that the roots of our discipline lie in ancient Greek culture. What do you think about the future of geography? Is geography and human geography still needed in the 21st century?
You’re right of course about geography’s long intellectual histories (in the West, in classical culture, and in Asian and in indigenous cultures too). We could be here for a very long time talking about the future of geography! In my view, it has never been more important to address important national and global questions from geographical perspectives, to understand the difference that place makes, that what is appropriate in that context might not be so somewhere else. That’s what I mean by thinking (and acting) geographically. This isn’t to privilege human geography. In one sense, it is to argue - as people have before me - for geography as an integrated subject, where humans (as part of nature) meet natural and environment phenomena.

Thinking geographically is also, I believe, to have a moral sensitivity, even a sense of moral accountability: that things need not be as they are, but can, with considerate action, be better.

How long have you been in contact with Hungarian geographers and with ELTE’s Centre for Geography? Is Hungarian geography recognized in, and can it be relevant to, the British-American dominated international scholarly world?
I first came to Hungary in 1991, to Janus Pannonius University in Pécs, because my then institution had teaching links in planning and in landscape architecture with staff there. I’ve been much more involved in research over the course of the last 12 years with colleagues in ELTE’s Centre for Geography, principally with yourself and with others, on questions of biography in geography, on the historical geography of geography and on geography and national identity. Hungarian academic geography is recognized and valued in what is as you say a scholarly world dominated by Anglo-American systems and structures (in English-language publishing, in international meetings). This is why international exchange and trans-national and inter-disciplinary exchange is really vital: from the need to share and value different perspectives, not unwittingly privilege some over others; from the need to talk to and learn from one another. I remember how important and valuable it was that there was a distinct Hungarian presence at the International Conference of Historical Geographers in London, for example, in 2015, and again in Warsaw in 2018.

Can you summarize the main argument of your inaugural lecture? (Trianon and its Aftermath: British Geography and the ‘Dismemberment’ of Hungary, c.1919-c.1923)
I’ll try but this is a complicated issue and there’s still more to do. Let me start from the position that we know the facts of the Treaty, and the effect of the Treaty of Trianon in 1920 - the ‘dismemberment’ of Hungary. What we know very little about is the involvement of geographers from other countries in drawing up the geographical proposals that led to the Treaty, and, especially for Britain, how British geographers at the time regarded Hungary, and what their reaction was - the aftermath - after 1920. So this is a study of geographers at work in defining a new Europe after 1918, in and after 1920. A central figure in the British context was Alan Ogilvie (who, later, became a professor of geography at the University of Edinburgh). Ogilvie had close links with Isaiah Bowman, the American geographer who led the proposals for the re-definition and re-mapping of Europe, on ethnic lines, that was the basis to Trianon. In Paris, where Ogilvie was at work, boundary work was a shared intellectual enterprise in two ways: between different fields of expertise and between experts on behalf of the Allied Powers, and largely based on ethnicity. In Britain, however, and in the Royal Geographical Society, different notions were advanced, even before World War I finished, about what boundary work was, and about how to delimit Hungary after the conflict. After 1920, other British geographers, but also Ogilvie, turned to the consequences of Trianon. That they did so in intellectual spaces other than the RGS was because the RGS was not then supportive of new developments in human geography, they turned different institutions as the forum for their work. Overall this is research on the historical geography of geography and the interests (and disinterests) of nation states, about the relationships between geography and national identity, and the importance of international perspectives in the development of geographical knowledge.